Skip to content
FacebookTwitterLinkedinInstagram
Get Your Free Quote: 1-844-RED-BAGS

Medical waste in developing nations differs greatly from disposal in the United States. Here are the basic facts.

Where there is medical care, there is medical waste that will need to be disposed of. Developed countries, like the United States already face unique obstacles when it comes to the volume of waste, whether it’s infectious or not.  Developing countries are a different story; where supplies are limited, disposing of medical waste in a sanitary manner is much more challenging where treatment options are minimal and disposal facilities are ill-equipped to handle infectious waste.

In developing countries, it comes down to resources and regulations, or lack thereof. For example, according to Globalization 101, while India has regulations known as Biomedical Waste Management and Handling Rules, most of the medical waste in India is dumped in the open and collected with the general waste, which poses health hazards for communities.

In Africa, many regions lack policy on medical waste whereas others follow the Stockholm Convention, which aims to protect human health and the environment from chemicals that remain intact in the environment for long periods of time. It also stipulates that facilities are required to use the best available technologies for incineration, which is not readily available in many developing countries.

India generates as much as 500 tons of biomedical wastes every day, while Saudi Arabia produces more than 80 tons of healthcare waste daily. The situation is worsened by improper disposal methods, insufficient physical resources, and lack of research on medical waste management.

According to the World Health Organization (WHO), it is estimated that 16 billion injections are administered worldwide, but not all of the needles and syringes are properly disposed of. Many countries either do not have appropriate regulations, or do not enforce them.

According to BCC Research, the amount of human regulated medical waste generated in the United States is approximately 2.6 million tons a year. Hospitals and large clinics make up a large portion of the waste stream, while smaller centers such as blood banks, physicians’ offices, pharmacies, and dental offices make up the rest. Of course, the United States not only has federal regulations to govern how medical waste is treated and disposed, but every state also has its own requirements for health and safety.

How can developing nations ensure safety and proper disposal of medical waste? According to the WHO, it comes down to raising awareness of the risks related to health-care waste and choosing safe and environmentally-friendly management options, to protect people from hazards when collecting, handling, storing, transporting, treating or disposing of waste.

Medical waste disposal and treatment is a complicated problem that is ever-changing as technology develops and perfects how we deal with it, but for developing nations, lack of technology makes it much more difficult. With enough awareness, the risk of medical waste can be properly managed. 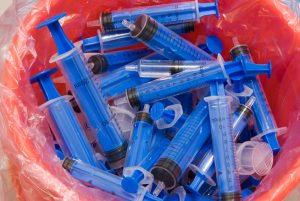